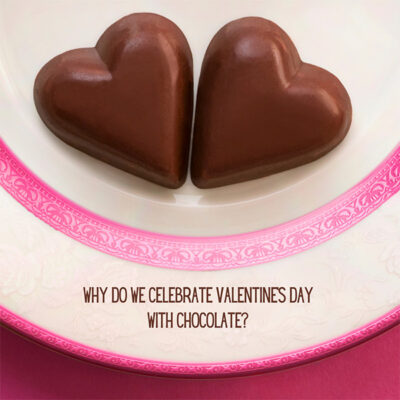 A Love Story: Chocolate and Valentine’s Day –
Would it even be Valentine’s Day without chocolate? Believe it or not, there was indeed a time before this well-loved pair was a thing. (And no, we wouldn’t want to live in that world either!)

Our favorite sweet treat and the day honoring Saint Valentine first hooked up for their happily-ever-after in England more than 160 years ago.

Cheeky For Chocolate
In England’s second-largest city, Birmingham, Richard Cadbury wanted to grow his “drinking chocolate” business, hoping to establish the beverage as a wholesome alternative to beer and spirits.

Drinking chocolate—hot chocolate’s rich European uncle—was an expensive luxury enjoyed mostly by the wealthy. However, when a tax cut on cocoa made chocolate more affordable, Cadbury started making “eating chocolates” that everyone could cherish.

A marketing genius, in 1861, Cadbury began designing and packaging his chocolate confections in beautiful heart-shaped boxes adorned with rose and Cupid motifs. The Victorian-era recipients loved them, saving the boxes to store special keepsakes including romantic letters from their sweethearts.

The Heart of Innovation
Fast forward to turn-of-the-century America, where Valentine’s Day was gaining popularity. Americans embraced the idea of curing the mid-winter blahs with thoughtful greeting cards and delicious chocolates. In 1907, the Hershey kiss was introduced—named for the smooching sound the chocolate made as kisses were produced.

In 1923, Russell Stover’s heart-shaped boxes of chocolates debuted in candy stores and drugstores, and the love affair between Valentine’s Day and chocolate was officially a thing.

Despite the cold weather, hearts still flutter and melt in mid-February when your crush comes calling with a heart-shaped box tucked under his or her arm!

Get Ready to Melt Hearts
Whether you’re looking for truffle hearts, praline lips, or a custom collection of indulgences, Saratoga Chocolate Co. has everything you and your Valentine need to honor the long-standing tradition of celebrating Valentine’s day with chocolate.