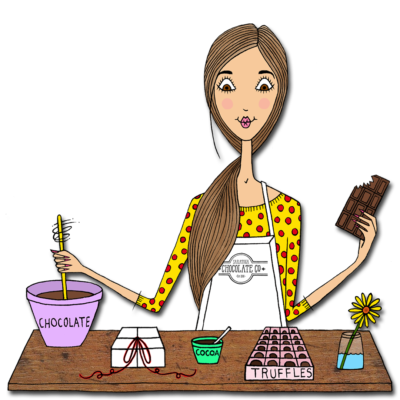 Head chocolatier and founder Allison Rose is passionate about chocolate. Bourne out of a keen interest in food and flavor, Allison began making chocolate back in 2005.

Her initial experiments won over her now husband and she has been regularly cranking out her world-class confections ever since! Over fifteen years Allison has perfected her craft and after a lot of dreaming, and even more planning, Alli officially launched Saratoga Chocolate Co. with her husband Hank in 2016.

When she’s not working in the kitchen, Allison wears many hats including mom, outdoor adventure enthusiast, clean energy nerd, and entrepreneur!

Saratoga Chocolate Co. is the brainchild of foodies and chocolate-aficionado Allison and Henry Rose. For the Roses, food is an expression of love. For Allison, chocolate has been the labor of that love for over 15 years.

Saratoga Chocolate Company prides itself on fine crafted truffles, pralines and chocolate bars, made by hand, using the highest quality ingredients. We pair the perfect chocolate – single origin or blended – with supremely matched flavors that create confections that are unequaled in the industry.

We are thrilled to share our craft and passion for food and chocolate with YOU!